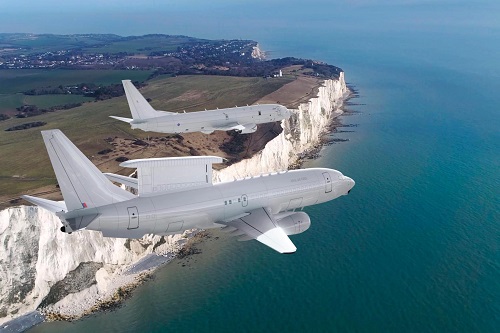 The conversion work – turning commercial 737 Next Generation airliners into a modern airborne battle management fleet – will create more than 100 highly skilled jobs: 90 with STS Aviation Services and 30 more with Boeing. The Birmingham-based employees will join the 50 Boeing employees already working on the Wedgetail programme throughout the UK, including at Bristol, Yeovil and RAF Waddington. The new work will be done at the hangar formerly operated by Monarch Aircraft Engineering at Birmingham Airport.

The Royal Air Force (RAF) announced in March 2019 a contract for five Wedgetail aircraft, guaranteeing the UK the world's most effective AEW&C aircraft at a fixed price. The Wedgetail's advanced radar and 10 state-of-the-art mission crew consoles can track airborne and maritime targets simultaneously, allowing crews to direct offensive and defensive forces while maintaining continuous surveillance of an operational area.

The Wedgetail is a proven aircraft that is currently in service around the world, including by Royal Australian Air Force, which used the aircraft on operations in the battle against Daesh in Iraq and Syria. It has been continuously improved since its inception, and it is the most capable aircraft of its type.

"We are thrilled to be partnering with STS Aviation Services in Birmingham on the Wedgetail," said Anna Keeling, managing director of Boeing Defence UK. "Wedgetail will provide the UK with the most advanced and reliable aircraft of its type in the world at a fixed price, and this work will provide good jobs for the many skilled aerospace engineers and mechanics in and around Birmingham."

Boeing and STS Aviation Services, which also operates a facility in Newquay in Cornwall, have already started recruiting in key areas for the new work in Birmingham.

"Being awarded this contract is not only great news for STS Aviation Services and Boeing, it's also great news for the Birmingham region, and a much-needed jolt for UK aviation," said Mick Adams, senior vice president and CEO of STS Aviation Services. "We have a long and favourable history working with Boeing, and we're excited that this work will be completed at our new state-of-the-art aircraft maintenance facility in Birmingham."

The first two US-based aircraft have been stripped to their frames and will arrive in the UK later this year. The first Wedgetail will be delivered to the RAF in 2023 and will based at RAF Waddington in Lincolnshire. STS Aviation Services joins other UK suppliers on the programme: Leonardo, which will deliver an integrated Defensive Aids System from its operation in Luton, and a project management and design team from Ridge, which is working with Boeing to design the facility that will house the Wedgetail fleet.

The work was previously announced for Marshall Aerospace and Defence Group. Marshall remains a valued supplier to Boeing and the two companies will continue their partnership on other programmes like the P-8.

Boeing's command-and-control aircraft expertise began in 1977, when it first modified a 707 aircraft for the United States. With the Wedgetail, the RAF will join an AEW&C fleet of 14 aircraft in operation around the world with the Republic of Korea Air Force, Royal Australian Air Force and Turkish Air Force.